“There is no hint of artifice in Rigg's performance, which explains why there was audible sobbing in the audience the night I saw the show. For the audience, these are real women with real dreams, real grief, real pain and real love. ” 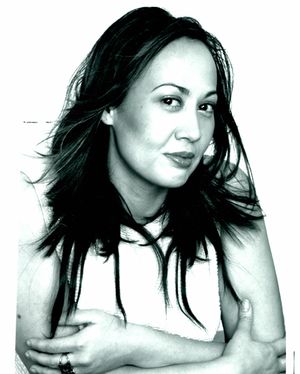 Amerasian actor/comic/med school dropout, Kate Rigg is a graduate of the drama division of Juilliard School in New York City where she was the winner of the school's Interarts Award, a full academic scholarship and a Gluck Performance Fellowship.

While at Juilliard, her first play "m/OTHER/land" was produced at the Tarragon Theater in Toronto (during the summer of third year) and subsequently as a Juilliard Summer Arts Grant Project in residence at the school.  Before Juilliard, Kate attended the British American Drama Academy in Oxford, UK and the summer program of the American Academy of Dramatic Arts. She also graduated with honors from the University of Melbourne, Australia where she acted in and directed several plays and won awards for writing and performance. She has been awarded a New York Foundation of the Arts Fellowship (NYFA) as well as awards from the Australia Council, The Canada Arts Council, The Asian Arts Initiative, The NEA, The Urban Arts Initiative, the Toronto Arts Council, The Jerome Foundation and many more.

Her classical training is complimented by her parrallel career in sketch and stand up comedy and spoken word/punk rock, which has seen her in residence at theaters like HBO Time Warner Workspace, The Comedy Central Theater, PSNBC, HERE Arts Center, Brava Theater Center, and The Smithsonian Institute.

She has been seen recurring on Law and Order, Fox's Family Guy, New Amsterdam, Tales of The City,  and in the Sundance Festival Favorite “That’s What She Said” directed by Carrie Preston. Her other TV credits include The Path, Law and Order SVU, Criminal Intent, The Web Series "These Thems"m Guiding Light, Wonderland, Oz, and various comedy and sketch appearances.

Off Broadway she starred in the New York premieres of Dogeaters at the Public Theater, and BFE at Playwright's Horizons. She was in the final Off Broadway cast of the original production of the Vagina Monologues at the Westside Theater. Other notable theater work includes: The Most Fabulous Story Every Told at Minetta Lane, Sez She at the Mark Taper Forum, The Jammer at the Atlantic Theater Co, 3 Kinds of Exile also at Atlantic, Lifespan of a Fact at Cincinnati Playhouse in the Park, and co starring in the World Premieres of Collective Rage at the Woolly Mammoth Theater in DC and A Thousand Splendid Suns at ACT in San Francisco.